Acrobatics and Tumbling Senior, Abbey Bauer, prepares for her last season on the Hilltop 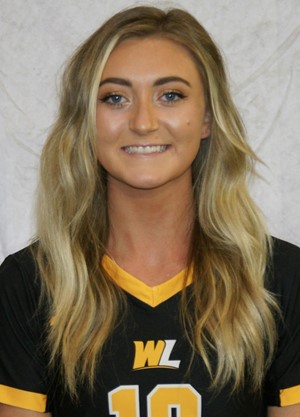 West Liberty Senior Abbey Bauer was raised in Moundsville, W.Va., and attended John Marshall High School. “I could not imagine growing up anywhere other than this small town. One of my favorite things about living in such a small town is that there is always someone you know when you go into a store or restaurant. It is a place that I love to call home.”

Growing up, she participated in many sports, some of which included tumbling and cheerleading, which led to her acrobatics and tumbling career at WLU. Bauer will be graduating as an elementary education major and a special education minor from West Liberty just like her mother and sister did in years before. Aside from being part of the acro and tumbling team, she also is a member of Alpha Chi National College Honor Society and has maintained a 4.0 GPA since attending WLU.

“My favorite memories from West Liberty include winning my first meet, traveling to other schools to compete, and all the friends I have made both in the classroom and in acrobatics and tumbling,” Bauer said.

The COVID-19 pandemic changed a lot of plans and the way society works and this is no different from how Bauer sees her acro career. Before the pandemic hit, the acro team was in the middle of their season, focusing on winning meets and getting ready for the MEC Championship in April. When the season ended abruptly, there was pain felt from the whole team. “Having a season in which many hours of blood, sweat, and tears were poured into ripped out from under our feet like that was painful. We were ready and no matter how hard we worked, the season had to end for the greater good of society,” Bauer said.

As this new season starts back up in a COVID-19 world, Bauer is dedicated to making the most of this season and accomplishing the goals set for last semester before the season came to a screeching halt. The one thing she is looking forward to this season is just getting back on the mat. With this being her final season, she feels that she has taken on a leadership role by helping her younger teammates both on and off the mat.

Bauer said, “I will miss getting to compete most. As a pretty competitive person, I love the feeling of competition and working hard towards something so challenging. I will also miss all of the friendships I have built within acrobatics and tumbling and my classes.”